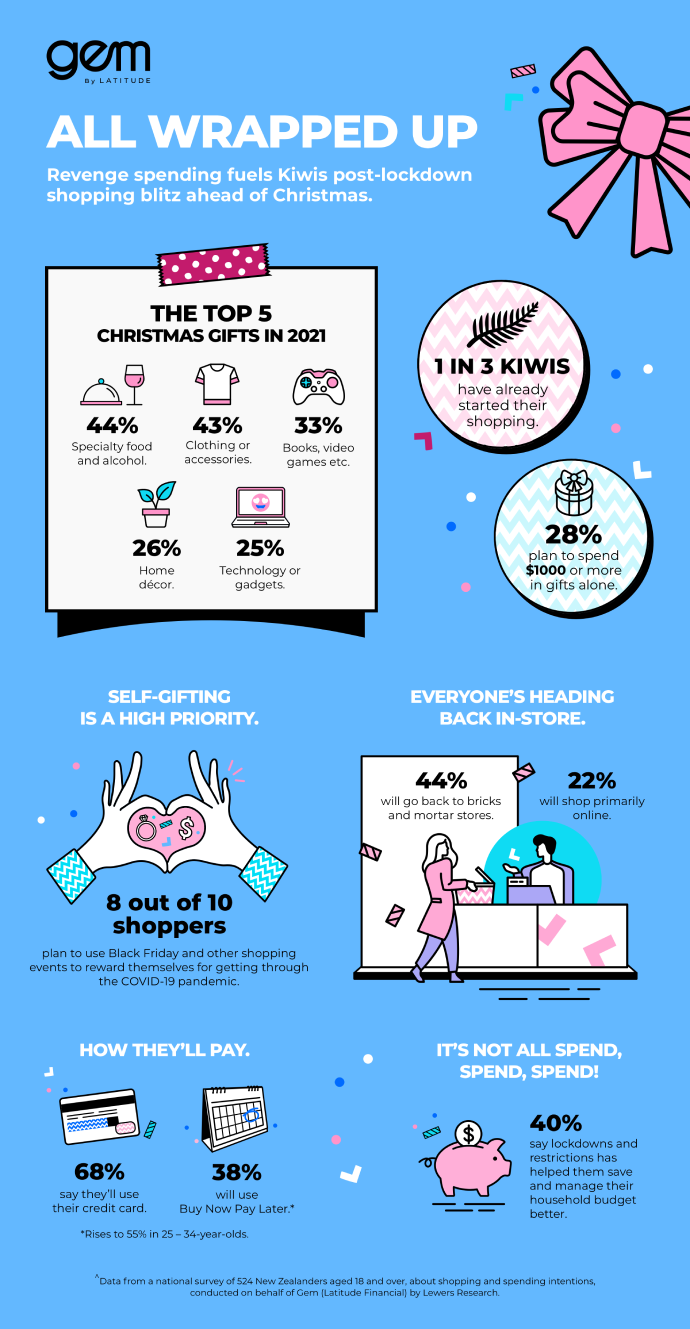 New Zealanders have begun revenge spending in an early Christmas shopping blitz, led by Auckland and Waikato as they emerge from extended COVID-19 lockdowns, a trend which is expected to peak with the Black Friday retail sales in late November.

A survey of New Zealanders’ Christmas shopping intentions undertaken by Gem Visa has found 6 in 10 New Zealanders are planning some retail therapy now the shops have reopened (71 percent in the Waikato and 69 percent of Aucklanders) with a quarter (24%) of 18–34-year-olds saying they will spend more this Christmas.

While online sales have increased due to changing consumer behaviour (22 % of New Zealanders say they will do their shopping primarily online for Christmas this year), 44 percent of New Zealanders are desperate to go back instore for some retail therapy, and 25 percent will shop online and in-store.

The survey of 524 New Zealanders found a third had already started Christmas shopping, with the most sought-after gifts including specialist food and alcohol (44%), followed by clothing and accessories (43%), home décor (26%) and technology and gadgets (25 %).

“This survey shows that consumers want to revenge spend to prove life is returning to normal, whether that’s buying something special for Christmas for the family or to indulge themselves,” said David Gelbak, Chief Country Officer.

“This is an important Christmas for all retailers to recover from the impact of the restrictions and New Zealanders are clearly ready to spend earlier and more than they ever have. Retailers should expect their biggest ever Black Friday or Cyber Monday sales events,’’ said Gelbak.

The survey also illustrated that New Zealanders are changing the way they shop. While the majority use their credit card to shop (68%), an increasing number (38%) embrace buy-now pay later or use zero interest instalment payments as an option, half of which (54%) are 25 – 44-year-olds.

This trend is supported by Gem’s fast-growing buy-now pay later platform Genoapay which has seen a strong growth in activity in the lead-up to Christmas.

“Genoapay is proving to be very popular with both customers and retailers. It’s 10 easy zero interest weekly instalments offer another way for shoppers to more easily pay off their Christmas purchases,’’ said Gelbak.

Another interesting aspect of the Gem survey is how COVID has changed the way people manage money – for the better. It found 40 percent believe the lockdowns and restrictions have helped them save and manage their household budget better and 32 percent said they’d used the time during COVID to pay down debt and save more.

Data from a national survey of 524 New Zealanders aged 18 and over, about shopping and spending intentions, conducted on behalf of Gem (Latitude Financial) by Lewers Research.

You could also read

Latitude steps up to Joint-Major Partner of AFL powerhouse Richmond